Throwback to 15 May: honorary degrees

Last Wednesday, 15 May, was unique. The five Flemish universities and VLIR-UOS payed tribute to five impact champions from the South by giving them the “Doctor Honoris Causa” title during an academic ceremony in BOZAR.

We created an after movie with the highlights of this special day. Enjoy watching and/or sharing it within your network:

Pictures of the event 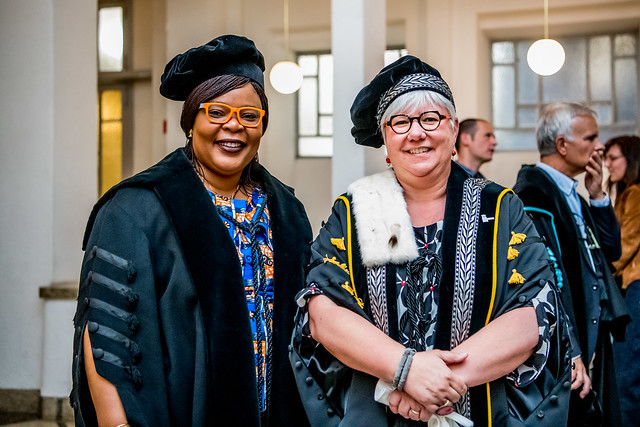 The recipients were invited in alphabetical order to the stage after a movie in which they were introduced as to their life, career and impact on society:

Hasselt University chose to honour Clarice Garcia Borges Demétrio (Brazil). Having gained worldwide recognition as an expert in biometrics, she has taught at dozens of universities all over the world. She has also invited many top international researchers to Brazil and ensured that dozens of young Brazilian scientists have found positions at leading institutions in the West. Policy makers, organizations and governments are increasingly looking to statisticians to address some of the world’s major challenges. They play a crucial role in helping to understand and solve a range of health, environmental or social problems.

Ghent University gave the honorary degree to Leymah Roberta Gbowee (Liberia). Having helped to end the civil war that ravaged her country, she was awarded the Nobel Peace Prize in 2011 together with Ellen Johnson Sirleaf. Since then, Gbowee has been committed to promoting peace and women's rights worldwide, including as an ambassador for the United Nations Sustainable Development Goals. Through her own foundation, she grants scholarships to girls and young women, emphasising the importance of education in development.

Gbowee : “In whatever I do, I have always strongly believed in the greater good of humanity”.

The VUB’s honorary degree went to José Ramón Saborido Loidi (Cuba). The former rector of the Universidad Central de Las Villas (UCLV) is now the country’s minister of higher education. Since 1998, the VUB and the other Flemish universities have been working closely with Cuban higher education institutions. Saborido Loidi has always been an enthusiastic supporter of this collaboration – not only with his own UCLV but with other Cuban universities as well.

Nteranya Sanginga (DR Congo) became KU Leuven’s new doctor honoris causa. As Director-General of the International Institute for Tropical Agriculture (IITA), he is committed to supporting small farmers in Africa by encouraging the use of new technologies to improve their quality of life. His work has already produced impressive results in areas such as poverty reduction and food safety.

UAntwerp’s honorary degree put the spotlight on Jean-Jacques Muyembe Tamfum (DR Congo), director of the Institut National de Recherche Biomédicale and professor at the University of Kinshasa. Muyembe Tamfum is one of Congo’s most active scholars. In 1977 he was involved in the investigation of the first Ebola outbreak. Now, forty years later, he has become an absolute authority on infectious diseases.

Opinion paper of the Flemish rectors

Challenges are huge, action is needed now. The Flemish universities call upon all governments to secure appropriate financial support to development cooperation at the level of 0.7% GDP, and to support university cooperation for development in particular, by recognizing our role, added value and impact, and also by securing appropriate funding.

Did you enjoy the intermezzo played by Maysan trio? Discover more of their music through their You Tube page

This oriental musical trio, is the fruit of Tammam Al Ramadan (ney) and Tareq Alsayed’s (oud) travel from Alep to Belgium. Having been friends for a long time on the one hand, and both musicians of the well-known Wajd ensemble on the other, it is with the will to create both instrumental and innovative music that they have found each other.

They are joined at percussions by Simon Leleux, who refines the trio’s sound. In a virtuosic, sensible, but unique way, they cover a Syrian, Iraqi, Egyptian, Greek and Turkish repertory, whilst also leaving room for improvisation. Thanks to compositions of Tareq, the repertory is expanded to Occidental influences. The trio has a certain freshness, an ease, a pleasure to play with extraordinary improvised dialogues, a sentiment of unity about it, resulting in a profound, strong melancholic and energetic type of music.